My Money Blog noticed a disturbing trend in some state-run prepaid college tuition funds. These plans initially sound like a great investment, but perhaps deserve a second look:

Lock-in tuition now, and don’t worry about future hikes. However, it appears that even though 18 states have pre-paid tuition plans, only seven of them actually guarantee them – Florida, Maryland, Massachusetts, Mississippi, Texas, Virginia and Washington. (The image below says six, but the article was corrected later to add Virginia.) 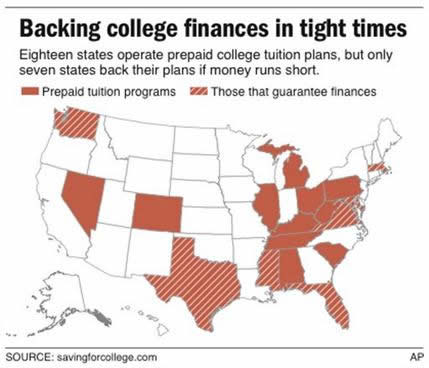 Currently, the plan hurting the most publicly is from Alabama, called the Prepaid Affordable College Tuition Plan (PACT). The plan’s asset value dropped from $899 million in September 2007 to $463 million at the end of January, nearly a 50% drop. Why? Because they invested over 70% of their assets in stocks, and also assumed a consistently high rate of return.

The Birmingham news does some actual journalism to get to the real heart of the problem. It seems that these plans fall prey to the same mistakes as many other publicly administered funds. Most egregiously, public fund managers are usually forced to fall back on unrealistic expectations to justify irresponsible investments that are “too aggressive,” i.e., too risky.

Haines said Alabama’s as­sumed rate of return is unrea­listic, and requires too much risk. Fund managers also haven’t incorporated enough hedging investments to lessen the impact of a downturn in the market, he said.

“We just felt that (the fund) was too aggressive,” he said.

According to an actuarial report on the fund filed by the state in January 2008, the fund’s managers then as­sumed a rate of return of about 8 percent until 2013, and 8.5 percent after that. That report also found that the fund’s liabilities exceeded its assets by about $20 mil­lion.