Last week, Lord Hutton of Furness released his long-anticipated report [pdf] recommending changes to the future of the British public employee pension systems. It contains some pretty stark recommendations, especially in comparison to most of what has been suggested in America.

For instance, while many American public pension reform proposals include changing the pension calculations to the final five years’ salary rather than the final three (to prevent so-called “pension spiking”), Lord Hutton’s recommendation is to calculate pensions based on average career pay. Additionally, he would greatly increase the retirement age in the uniformed services (police, firefighters, military) to 60 years, as much as a 10 year increase. Generally, public sector workers will expect about a five year increase in age of retirement.

Here is what the Hutton Report calls “The Deal,” which helpfully reminds us that what’s really at issue is negotiations between public sector employees and taxpayers. 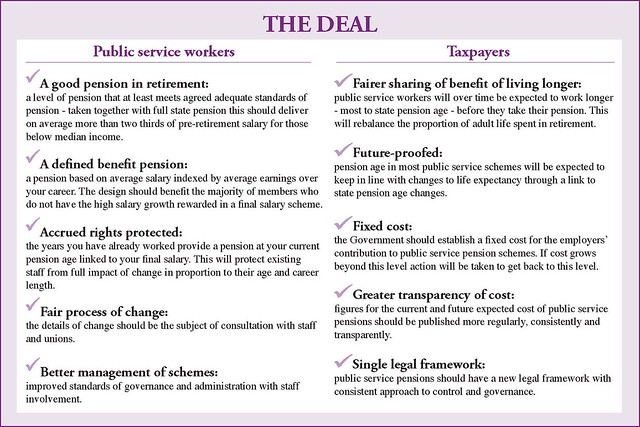 Here’s a good summary of provisions by the FT. Here’s the Treasury FAQ.

One of the ways in which hard-up states are seeking to increase revenues is by increasing taxes on cell phones and other mobile communications devices, which when combined with federal taxes, can now total almost a quarter of a user’s monthly bills. (Indeed, only in three states is this total tax rate less than ten percent.)

Today an article on BNA suggests that on the federal level, lawmakers may have had enough. The Wireless Tax Fairness Act, which was introduced but never voted on in two previous Congresses, would prohibit  new “discriminatory” fees and taxes on cellular products. One of the bill’s sponsors, Rep. Zoe Lofgren of California, is quoted as saying “Some localities are taxing cell phones like sin taxes. I don’t think using a cell phone is like smoking, but that’s the tax rate.”

This stikes me as exactly right. A little background on basic public finance is in order. The purpose of taxes is to raise money for necessary governmental functions. To that end, economists frequently prescribe that rates be low and broad in order to minimize the impact on consumers’ behavior — so-called tax neutrality. This is because taxation should be about raising revenue, not changing behavior.

Some economists tweak this prescription through the Ramsey Rule, which holds (in a nutshell) that the more influenced by tax rates consumers are (demand elasticity) the less something should be taxed (and vice versa).

Sin taxes are the opposite; they’re about reducing a behavior that policy makers judge to be morally offensive (like many people view smoking).

Relatedly, Pigouvian taxes seek to bring the costs to society (the social cost) in line with the costs born by a buyer. (For instance, some people advocate higher alcohol taxes on the theory that drinkers impose costs on others, though this argument is fraught with difficulties.)

Cell phone taxes above regular sales taxes levied by states and localities do not fit any of the four rationales provided here. On the one hand, taxing them at over twenty percent of a user’s bill is hardly neutral. Nor does it likely fit the Ramsey Rule prescription; consumers respond to cell phone taxes by buying less of it or by avoiding taxes by pretending to move. (Just look around you at how consumer takeup and use of cell phones has changed as prices have fallen over the last decade.) Cell phones are not sinful or offensive. And there’s no serious case to be made that the social cost of cell phones exceeds the cost born by users. In short, by any principle of public finance, high cell phone taxes are a bad bad bad idea.

Cell phones are, most people’s revealed preferences show, a great thing. There’s simply no case under the principles of tax neutrality, the Ramsey Rule, sin taxes, or Pigouvian taxes to tax cell phones at these high rates. Policy makers would be well advised to cut rather than hike these rates going forward.

Forbes has put together a nifty interactive map of nationwide county-by-county migrations patters. See Tiebout sorting at work! The map shows inward and outward migration numbers, and the income of the households doing the moving. To take one example, here’s what it looks like for Arizona’s Maricopa County:

Eileen Norcross and Andrew Biggs have a new paper out this morning entitled “The Crisis in Public Sector Pension Plans: A Blueprint for Reform in New Jersey.” While it’s focused on New Jersey, it does an excellent job of outlining the larger problem with state pension plans nationwide and what policy makers can do about it.

New Jersey’s defined benefit pension systems are underfunded by more than $170 billion, an amount equivalent to 44 percent of gross state product (GSP) and 328 percent of the state’s explicit government debt. Depending on market conditions, the state will begin to run out of money to pay benefits between 2013 and 2019. The state’s five defined benefit pension plans cover over 770,000 workers, and more than a quarter million retirees depend on state pensions paying out almost $6 billion per year in benefits. Nationwide, state pensions are underfunded by between $2.8 trillion and $5.2 trillion, some 20 to 37 percent of America’s annual output as much as $3 trillion, approximately 20 percent of America’s annual output..

This path is not sustainable. In order to avert a fiscal crisis and ensure that future state employees have dependable retirement savings, New Jersey should follow the lead of the federal government and the private sector and move from defined benefit pensions to defined contribution pensions. While significant liabilities will remain, the first step to addressing the pension crisis is capping existing liabilities and providing new employees with more sustainable retirement options.

Today is the first day of the 2010 hurricane season, which NOAA predicts will be more active than usual, with 14 to 23 named storms. (In fairness, NOAA has been way off the mark in recent years, to the relief of the residents of the Gulf and Atlantic coasts.)

The Mercatus Center’s Gulf Coast Recovery Project has put out over 50 studies since 2005 looking at the rebuilding of the Gulf Coast after Hurricane Katrina. Below are links to eight studies that state and local policy makers may find useful today and in the coming months.

For more information about these studies or to request hard copies, feel free to email me using the link here.

Via Seth Goldin’s Twitter Feed, the unintended consequences of cul-de-sacs:

Though suburban cul-de-sacs have long been attractive as quiet, safe places for families, their disadvantages are becoming clear. One of the biggest problems is interference with motor- and foot-traffic flow. Research by Lawrence Frank, Bombardier Chair in Sustainable Transportation at the University of British Columbia, looks at neighborhoods in King County, Washington: Residents in areas with the most interconnected streets travel 26% fewer vehicle miles than those in areas with many cul-de-sacs. Recent studies by Frank and others show that as a neighborhood’s overall walkability increases, so does the amount of walking and biking—while, per capita, air pollution and body mass index decrease.

Last year, Eileen Norcross wrote about Virginia’s ban on future cul-de-sacs, arguing for internalizing the externalities associated with them rather than banning them outright.

The Atlantic is hosting a one-month blog by Conor Friedersdorf about the future of the city:

In the coming month, this page will explore cities in the same spirit as the person who thrills at urban life more than any other kind. He or she may find rural or suburban settings likable enough, but bliss as a traveler means arriving at a downtown train station armed with a map, a comfortable pair of shoes, and endless walkable blocks to explore. And everyday living? The lover of cities craves bustle if not always hustle, contact with different kinds of people, the anonymous solitude that masses provide as well as lakefronts, and every benefit of civilization that requires a certain scale before it is a daily possibility.

Today’s offerings include an interview with Portland’s iconoclastic mayor Sam Adams and a list of free things on Craigslist in some major and minor cities.

George Mason University’s Department of Public and International Affairs is hosting Ray Scheppach, executive director of the National Governors Association, on April 21 from 4 to 6 PM for a talk entitled “The State Fiscal Situation, Health Care Reform and Federalism.” This should be of interest for most of the readers of this blog. The talk will be in Enterprise Hall on GMU’s Fairfax Campus. END_OF_DOCUMENT_TOKEN_TO_BE_REPLACED

Tax Foundation state projects director Joe Henchman writes in today’s Daily Caller about five ideas to help states facing budget shortfalls (that is to say, virtually every state) get back in black:

But what’s most surprising about New Jersey is how in such a blue, labor-dominated state, Democrats and union members seem to be cracking under the pressure of the state’s tax burden, revealing a kind of split-personality disorder. END_OF_DOCUMENT_TOKEN_TO_BE_REPLACED